MEG LANZARONE
Meg was born & raised on Long Island, and has been singing since the comfort of her car seat. She spent most of her childhood performing in countless community theatre & school productions, and she went on to graduate from Hofstra University with a B.F.A in Theatre Arts.

She has since traveled the world as a Lead Vocalist working with companies such as Celebrity & Azamara cruise lines & playing OZ in Royal Caribbean's production of We Will Rock You, the Queen Musical. Meg has starred in multiple Off-Broadway shows, including NEWSical: the Musical, The Marvelous Wonderettes, and most recently at Theatre Row on 42nd St. as Barbara in the world premiere of Night of the Living Dead: the Musical! She is featured on the original cast album currently ranking in the Top 100 Soundtrack albums on iTunes. She has sung at some of NYC's most iconic cabaret venues: the Laurie Beechman Theatre, Don't Tell Mama & 54 Below.

​Meg has fronted many cover & tribute bands. She is currently the front woman for The Event Horizon, a rock n roll infused, high energy cover band playing the East Coast club circuit from Vermont to FL including residencies at numerous Atlantic City & Jersey Shore venues. She is also a Lead Vocalist with the powerhouse Top40 vocal trio the Uptown Girls touring Theaters across the U.S. She is a successful Voice Over Artist working with companies such as YAHOO! and Nickelodeon, and has provided lead vocals as a Recording Artist for Broadway Licensing and Theatrical Rights Worldwide including musical adaptations for Tilly the Trickster based on the book by Molly Shannon and The Perfect Dog based on the poem by John O'Hurley.

Meg is an electric ukulele player, bringing her pop/rock style to the ukulele world!
She recently completed the 100 Days of Ukulele Songs Challenge which is documented on her instagram page @meggi_lectric_music. She is also raising money for the Playing for Change Foundation through the Charity Miles app, and is a proud member of the Actors Equity Association & American Guild of Variety Artists.
​ 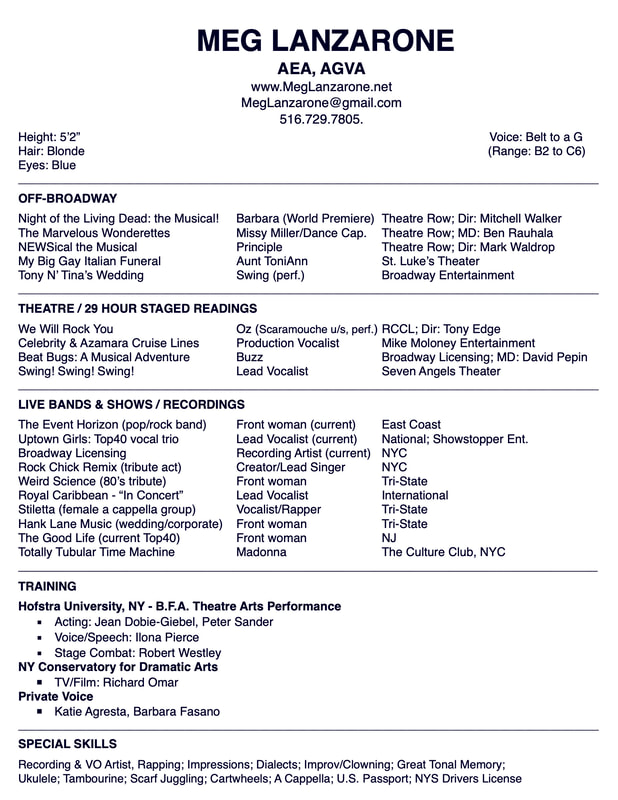